Thanks for once again supplying us with tips and tricks. You did such a wonderful job in the old forum!

Just as a reminder, if anyone has DAP x64, you can correct perspective using the tool supplied with the program under the "plug-in" menu item called "Perspective Correction".
-- Mary
http://www.mhwarner.com
Top

Color your picture as regular.
Open your artwork in FotoSketcher and choose Painting
You can also add a fabric structure together or individually.
counting scales
Top

Anyone know how to get the templates for HD 64 bit AOP's..or make them ..Purchased the program and want to tinker.HMM..Thanks Amzie
Top

In order to create a template (old or new) you need 2 jpegs (image and mask). It's the size that will tell DAP if it's an old or new template I believe. Have to admit, I've never created a new template yet in order to keep my AOPs the most compatible, but the process should be the same. The only extra thing you need to do is run DAP as administration (right click your DAP short-cut and run as Aministrator option) for Win7 or Vista). Note, you can't create or use 64-bit DAP AOPs unless you have a 64-bit OS, but assuming you knew this already.

I wish I could divide templates into more than 10×10=100 tiles. This would give styles a better variety. But DAP 2.5.5 (32-bit) definitely supports at most 100 objects.
#MediaChances — a deviantArtist group
Top

I created a custom XCF (GIMP) file with a 10X10 grid guides and then place the brushs (well objects for my case) within each of the blocks; see attached for screenshot of my XCF template).

Now for something completely different:

My guide to really thick paint

DAP offers a feature "Thick paint" in the "Advanced" painting style tab. This will gradually cover the canvas texture. But it does not simulate a relief according to the paint thickness. We will have to apply that manually in a painting program, using an "Emboss" kind of filter. But there are several quirks...

An embossing algorithm uses the brightness as "height" information; therefore, the disadvantage of using the image itself as base for a relief is: The brighter the color, the "higher" the relief. The result will not always look as desired. Dark areas would appear inset, bright areas outset instead.

Fortunately, DAP can help us, delivering the required information. The thickness map offers you just what you need: The more often and more opaque DAP paints over a specific area, the brighter the thickness map gets, and this is the advantage in converting it to a relief overlay.

Most more or less modern image editors (Photoshop, Paint Shop Pro, GIMP, etc.) are able to work with several layers and different blending modes, e.g. those which apply brightness changes to the lower layers, according to the own layer's brightness, like "Soft light" and "Hard light". The content of such a layer should be 50% gray (#808080) where no change is expected, anything brighter or darker will change the brightness of the underlying image.

Let's take "Camille" as example template, it has the "Thick paint" attribute enabled, so thicker paint will tend to cover the canvas structure, which adds to the impression of paint thickness.

The general workflow is rather brief: Now the quirks...

Do not use the one in the "Texture Effects" submenu of PSP9. It is both too simple and confusing, the result appears like "light from the left bottom", although people with a latin writing system are more used to "light from the left top" in 3D relief effects, based on their usual reading direction.

I would recommend using the "User Defined Filter" dialog with a convolution matrix. It allows a softer averaging of the neighborhood of each pixel, as well as using a preferred "light direction", by carefully choosing the convolution parameters. 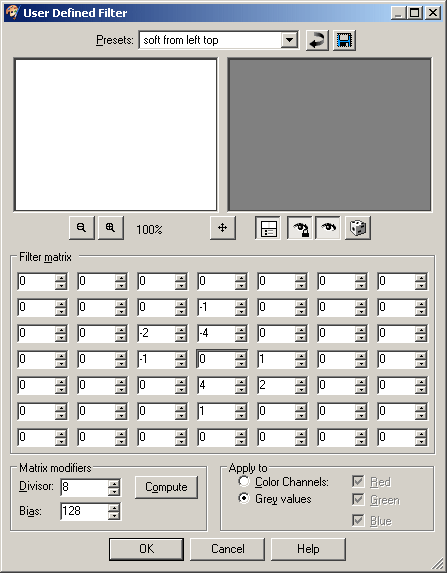 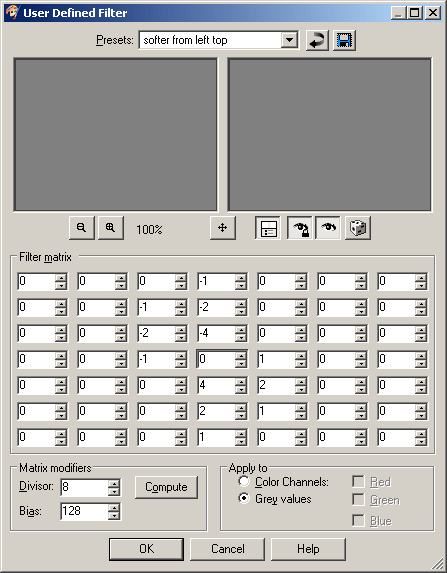 Furthermore, you may like to tweak the thickness map before and after embossing it. Try to raise its Gamma value before embossing, possibly also a slight blur. Try a "Histogram Stretch" (or a raised Contrast) afterwards, possibly also a slight blur. Try either "Soft light" or "Hard light" as layer mode. Adjust the layer opacity. Or tweak the AOP settings to give the thickness map more substance (make it paint more strokes). 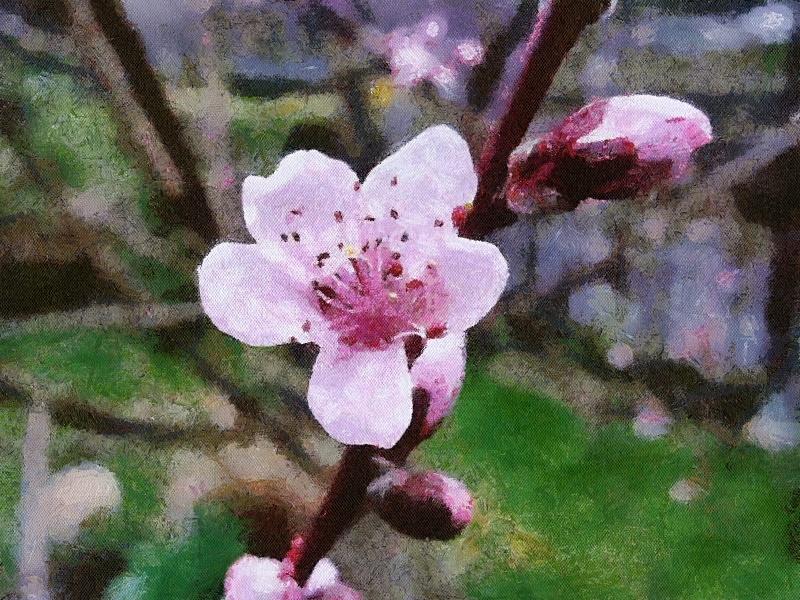 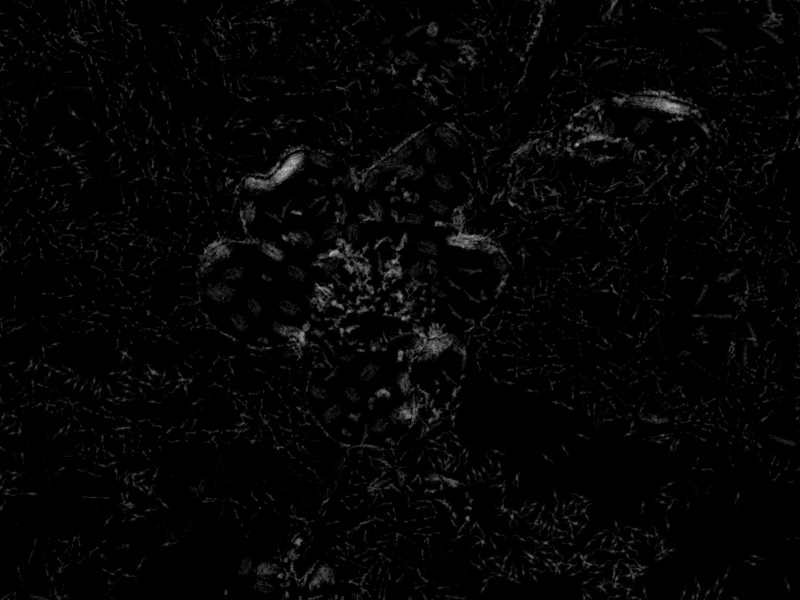 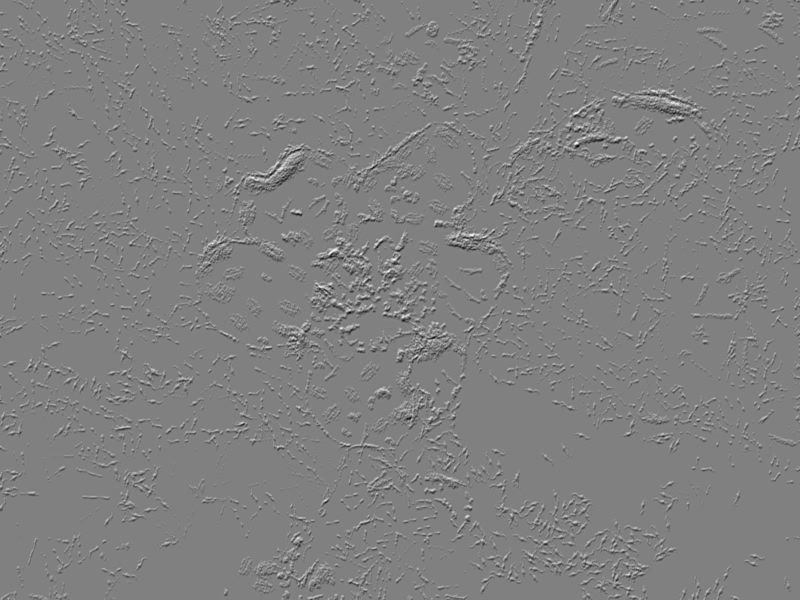 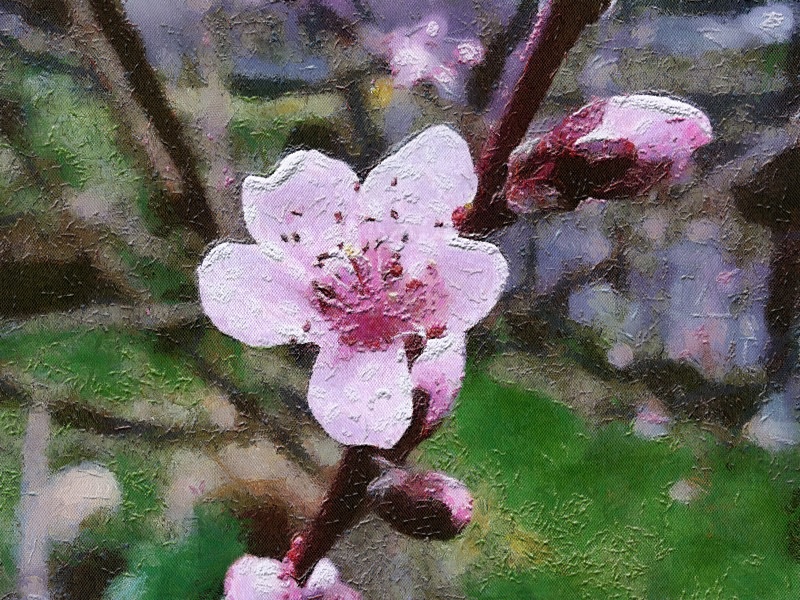 Thanks - very useful and helpful!!
Top